Have you ever awoken from sleep to find yourself paralyzed with fear as something dark and evil sitting on your chest has pinned you down? You try to scream or move, but find that you cannot. You are overcome with terror.

It’s more common than you think. About 15% of us, male and female, experience this at some time in our lives. Sometimes it happens over and over on a nightly basis; sometimes only for a brief period of time.

It happened to me more than once when I was a young mother. On evening when I went to bed, I was so bone-weary my body felt like lead. But before I could drift off I felt someone climb into bed with me, straddle my stomach and lean on my chest. One of my young children, I was sure, had come to me because they couldn’t sleep or had had a nightmare and wanted my attention. I was so tired I didn’t not want to get up and laid there for a while hoping they’d go back to bed on their own, but they didn’t. 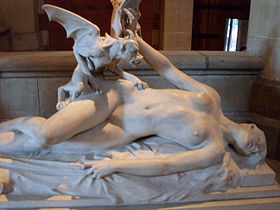 So I finally gave in and opened by eyes to see which child needed me. But when I did, nothing was there. No child. Nothing but a heavy pitch black darkness that was staring me in the face with such a sinister and evil intent that I tried to scream and scramble away. But I couldn’t.

I couldn’t move, I couldn’t scream. I tried with all my might but could only squirm helplessly, and move my mouth but nothing would come out.

I’m not sure how long this lasted, and how I finally managed to get the attention of my husband who was sleeping next to me. When I did, it broke the spell. The heavy darkness disappeared and I was able to move. I told Dale what happened, and he said he could hear me moaning and wriggling, but saw or heard nothing else.

It happened the next night too. First the feeling of something crawling over my legs and then climbing on my chest, staring malevolently at me and holding me down. Again I was frozen with terror and could not move or speak. Again I was finally able to alert my husband.

The third time it happened, Dale felt it too! Felt something scampering across our legs. He jumped out of bed and flipped on the lights. But nothing was there.

It happened twice more, each time Dale feeling it too and jumping up to investigate. We knew it wasn’t the children who were sound asleep in bed. We wondered if it could be our parrot (we had no other pets at the time) but Sinbad was on his perch in the family room, and besides, whatever scampered across our legs was much heavier than a bird, even a large one.

Could it be a rat? It would have to truly be a gigantic one. But none of those things accounted for the heavy dark thing that crushed my chest and paralyzed me. None could account for the horrible sense of evil malevolence staring me in the face.

It never returned after that fifth visit. In fact, I’ve never experienced anything paranormal or spooky or ghostly since then. But years later I was stunned to see in a magazine a picture of the very thing that had sat on my chest. In this artist’s depiction, the dark, evil presence was in the form of a demon, and I “recognized” it at once, even though at the time I had seen only darkness. But the demon exactly matched the sense of grotesque, malevolent evil I had felt staring me down.

I was surprised, and somewhat relieved, to find out that this sort of occurrence is common across many cultures, and each has its own name and explanation for the demon. In some southern states, the visiting demon is known as “The Old Hag”. In Mexico it is referred to as “subirse el muerto” (dead person on you). In Scandinavian folklore the paralysis is caused by a mare, a damned woman. In Turkey, it is a supernatural being known as a dijinn. In other cultures it is an incubi or succubi.

In recent times this phenomenon has been thought to be a form of “sleep paralysis” or narcolepsy. Wikipedia defines it this way:

“Sleep paralysis is a phenomenon in which people, either when falling asleep or wakening, temporarily experience an inability to move. More formally, it is a transition state between wakefulness and rest characterized by complete muscle atonia (muscle weakness). It can occur at sleep onset or upon awakening, and it is often associated with terrifying visions (e.g. an intruder in the room), to which one is unable to react due to paralysis.”

While this certainly describes my sleep-state and my paralysis, and even perhaps my terror, it does not account for the feeling of something crawling across my legs, or the fact that my husband, who was not paralyzed, felt it too! For those who have actually experience this demon-like presence, the sleep-paralysis explanation does not come close to describing the full extent of this horrifying experience.

Whatever it is, it is vivid enough and frightening enough to have inspired the drawings and paintings of several artists through the ages, as you can see in the photos illustrating this post. Poets too have been inspired.  Here’s a bit of what Erasmus Darwin wrote in his poem “The Botanic Garden”:

“On his Night-Mare, thro the evening fog,
Flits the squab fiend o’er fen, and lake, and bog,
Seeks some love-wilder’d maid, by sleep opprest,
Alights, and grinning, sits upon her breast.”

I found this on a blog post by Mike Rendell called “The Night Mare, the Nightmare, and the Night Mayor.” It’s an interesting and fun read on how artists through the ages who have depicted the event, some in humorous and politically expedient ways.

While I have been happily free of supernatural occurrences since the last visit of this “demon,” I cannot end this series without relating another attempt at demonic possession, or at least an evil intent, that tried to influence me while living in that haunted house as a child that I wrote about in my first post.

The “thing” that trod across my bedroom in the night so long ago, that knocked my mother to the floor, tried, for one brief moment at least, to inhabit me.

This is Part V of an ongoing series leading up to Halloween of true life ghost stories, experienced either by me or by people I trusted.