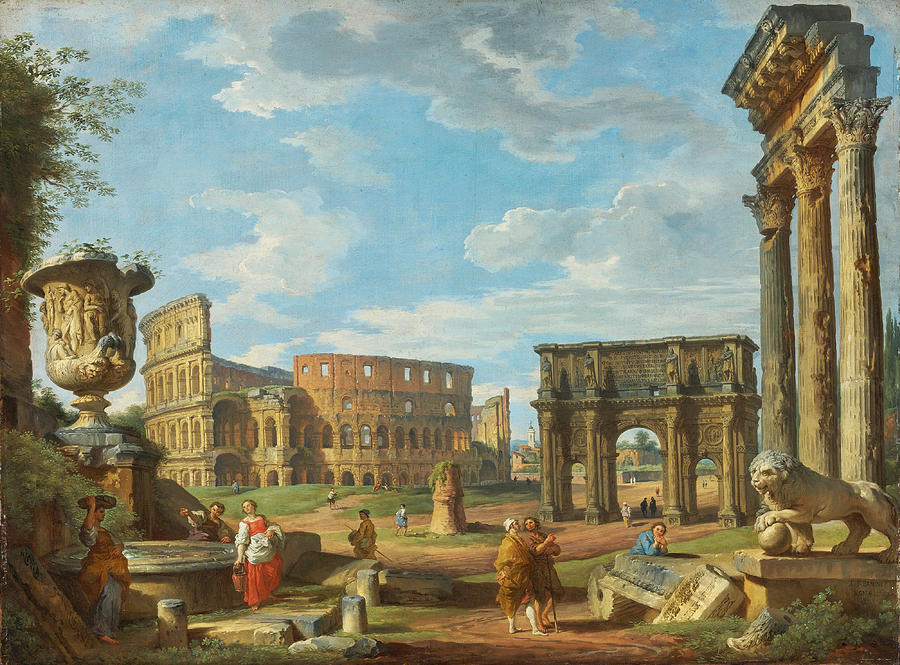 The Roman Forum lies right behind the Colosseum, that I wrote about last week. It is the great plaza where Caesar and Augustus and other Roman emperors once trod and, like the Colosseum, has been a mecca for tourists, artists and photographers down through the ages.

It was mostly in ruins when the Vikings first sailed up the Tiber River to gaze at this wonderland of antiquity.

A View of the Roman Forum today, image from Wikipedia

I was there for one short and very hot afternoon last summer. I didn’t take as many photos as I wish I had, but the views I’ve become most enamored by are the ones that artists painted hundreds of years ago. You will find my photos mixed among those below. 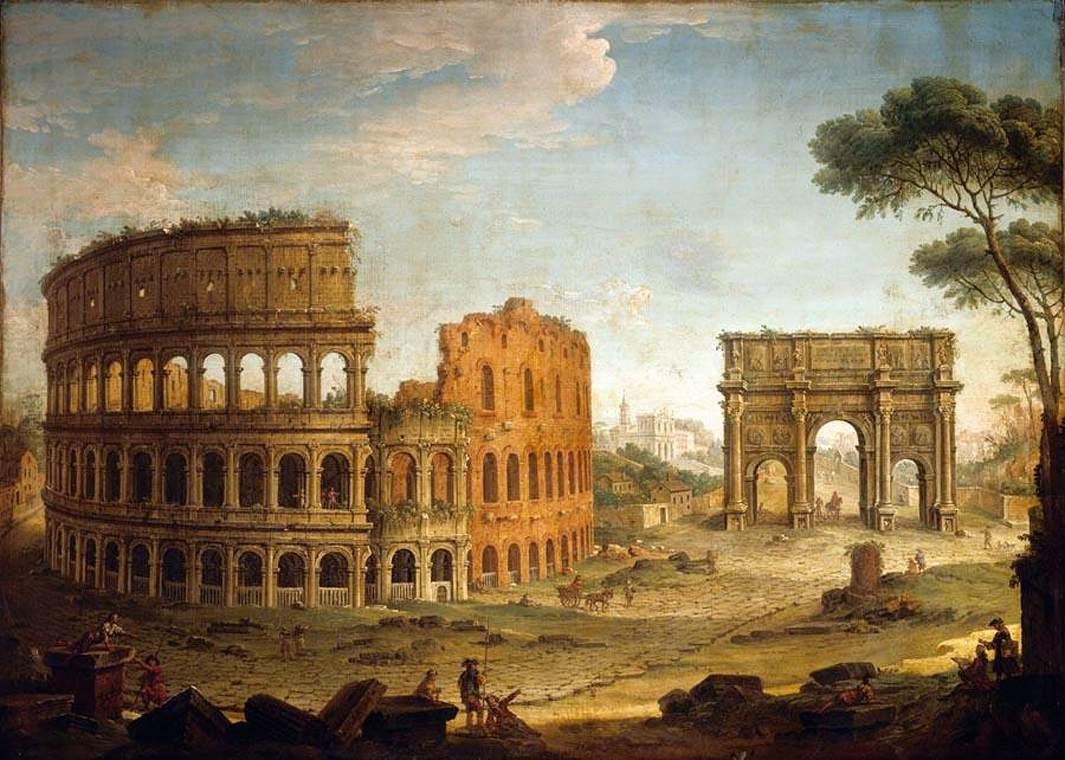 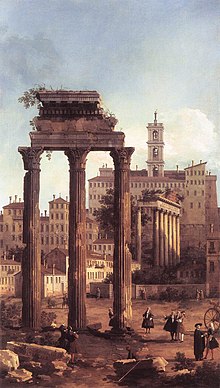 One of my favorite stops during my travels last summer was visiting the ancient ruins of Pompeii, a sprawling city buried beneath 15 feet of ash and pumice when Mt. Vesuvius erupted in 79 AD.

It was such a strange feeling to be walking along the streets and into the homes and bath houses of people whose lives had been buried in an instant for centuries. We only had three hours to see what needed several days, at least, to explore fully. But I still came away feeling deeply moved, and somewhat eerie, as if I was voyeur peeking through the curtains of time into private quarters never meant for my eyes.

It was fascinating how much of the colorful frescoes, painted tiles, and sculptured wall friezes survived; how wide and well-paved the streets and  sidewalks were; and how many clay pots and urns remained intact buried beneath the ash. Also buried were the bodies of those unable to escape in time. Those final moments are now memorialized in plaster casts.

In the brilliant dark comedy “In Bruges,” a mobster sends his two hitmen to Bruges to cool their heels after a job went horribly wrong. What the two men don’t know is that they were sent there so they could have a beautiful “fairy tale” experience before one partner was ordered to kill the other. Things don’t go quite as the boss had planned.

But he was right about one thing. The film’s brooding, atmospheric cinematography did create a fairy-tale, dream-like veil through which the city’s medieval history, fabulous architecture, graceful bridges, and misty canals are revealed.

In person, Bruges does not disappoint. It was one of my favorite stops on our European adventure and I’d love to see more of it someday. Three days was not enough. There are more cobblestone streets to explore, more art museums to visit, more boat rides down misty canals. More Belgian chocolate, beer, and waffles for that matter.

The city’s many canals, bridges, and swans are favorites, of course. Bruges is known as the Venice of the North, and since I wasn’t able to get to Venice this trip, it made this city even more special to me.

Then there was the history and the architecture! From the quaint little corners of the city . . .

. . . to the spacious and grand central plaza with its flags and cafes, shops and towers.

Bruges was full of comic surprises and delights . . .

. . . to the intimate peek into a doctor’s office on display outside a ceramic shop . . .

Then there was the chocolate, the waffles, and the beer . . .

I’m not much of a beer drinker but I did find a fruity blend that suited me quite well.

These were just a few of my favorite memories of this fairy-tale, dream-like city. For more, watch the film, it won’t disappoint.

One of my favorite side-trips when traveling in Europe was the day we spent in Segovia, viewing the Roman Aqueducts and visiting the Alcazar, a 12th century castle where Queen Isabella grew up.

The Roman Aqueduct is by far the most dramatic feature of a city full of beautiful landmarks. Built in the 1st century, it  rises nearly 100 feet tall and reaches over 2600 feet long, consisting of over 170 arches and 25,000 granite blocks, all built without mortar. It delivered water to the city for over 1800 years, until the mid 19th century.

The city through which it passes is a painter’s palette of raw sienna, burnt umber, and yellow ochre, stitched together with narrow streets of cobblestone and brick pavers.

We stroll through the damp streets with the patter of raindrops on our umbrellas, stopping often  to visit the quaint little shops along the way, to watch the street performers play, and to snap photos of each other.

We love the ornate doorways we find, the flower-filled balconies, and richly textured walls we pass.

Eventually the narrow streets lead us into large plazas, as it does here before the Iglesia de San Estaban with its Romanesque bell tower, built in the 14th century.

The largest plaza on our walk opens up to reveal the jewel of the city, Segovia Cathedral, built in the mid 16th century. It is considered a masterpiece of Basque-Castilian Gothic architecture and is known as “The Lady of Cathedrals.”

Surrounding the spacious plaza are an array of sidewalk cafes and tall, elegant buildings.

Another steep climb from the plaza leads to the Alacazar. It sits high above the city on a  stony crag with steep cliffs falling to the Castilian valley below. The castle, first referenced in 1120, was a favored residence of the Spanish Royals. This is where Queen Isabella spent her youth. Where she fled with her husband Ferdinand for protection from her enemies when they were newly married.  And it’s where she was finally was crowned Queen of Castile and Leon.

It’s tall towers and turrets are said  to be the inspiration for Disneyland’s castle, but several other castles claim that distinction as well.

Inside the castle is a dazzling array of richly decorated halls, chapels and armories.

The views from the ramparts are dizzying as well as dazzling, revealing lush forested hillsides, . . .

. . .and panoramic views of the city of Segovia.

Here you can see the towers of Segovia Cathedral and the Iglesia de San Estaban in the distance. Note too the ancient walls that surround the city, built before Isabella’s father retook the city from the Arabs.

I’m asked all the time which were my favorite places to visit during our 30 days of travel, but I can’t quite pin that down, there were so many.  Still, when asked, Segovia always rises quickly to mind.

If you ever get the chance to visit Spain, the city of Segovia is a must-see.