Stepping inside La Sagrada Familia cathedral is like walking into an enchanted forest. Your gaze goes and up and up, following the trunks of  trees toward light-filled branches.

The forest is made up of several kinds of stone, so each tree trunk has its own subtle shade, some leaning red, others green. They branch out at the top into smaller and smaller columns, like fingers stretching out to hold up an impossibly ornate ceiling.

Only it’s not a ceiling at all, but a canopy of leaves and stars woven tightly together, as you would find in any forest grove.

Toward the right of the main entrance is the heart of the cathedral with two massive organs and rows of pews for worship. There floating  beneath an umbrella of lights is the upward-gazing figure of the Christ.

Along the sides of the main chamber are spiraling staircases moving up the towers, to what and where, I do not know.

Colored light floods the cathedral, streaming through the stained glass windows, or projected along the walls and columns, flowing from blue to green, and gold to scarlet,

Glimpses of the crypts below can be seen through artful cut-outs in the stone.

Toward the exit is a large loggia featuring some of the furnishings Gaudi created for the cathedral, and a single simple painting, capturing the tenderness and grief at the fallen Son.

Below are two virtual tours of Gaudi’s Sagrada Familia. The first video is very short and gives you a 360 degree view of the interior main chamber. The second video, which takes around five minutes, shows both the exterior and interior, with some lovely aerial shots outside, while inside the church is full of worshipers during its consecration mass.

All the still photos in this post are my own except for the ceiling shot which came from Wikipedia.

My last blog post features the exterior of La Sagrada Familia and tells more about its creation.

This stunning cathedral, a tribute to Antonio Gaudi’s genius and imagination, his love of God and Nature, was begun in 1882 and is still a work in progress. It’s hoped to be completed by the centennial of Gaudi’s death in 2026, but many believe it will stretch well beyond that date.

“There is no reason to regret that I cannot finish the church,” Gaudi wrote. “I will grow old but others will come after me. What must always be conserved is the spirit of the work, but its life has to depend on the generations it is handed down to and with whom it lives and is incarnated.”

“La Sagrada Família is made by the people and is mirrored in them. It is a work that is in the hands of God and the will of the people.”

On it’s completion, it will tower 560 feet, slightly less than the the highest natural landmark in the vicinity, Montjuïc hill . Gaudi believed that nothing should rise higher than the hand of God, and he revered Nature, not only as God’s handiwork, but as the inspiration for all that can be called art. “Nothing is art if it does not come from nature,” he once famously said. Therefore his buildings have no straight lines or sharp corners because “there are no straight lines or sharp corners in nature.”

Already his structure dominates the surrounding city of Barcelona, and it is only one-half of its envisioned height.

The model below shows what the completed structure is meant to look like, but only the brown parts are currently built. 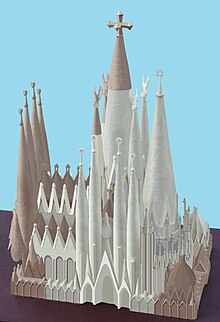 Salvadore Dali referred to La Sagrada’s “terrifying and edible beauty.” Art historian Nikolaus Pevsner likened its growth to “sugar loaves and anthills.” Time Magazine found it “sensual, spiritual, whimsical, exuberant!” While George Orwell called it “one of the most hideous buildings in the world.”

I have to admit when I first saw it from the street its hugeness combined with its extremely ornate facade topped by construction cranes made the whole affair seem monstrous and grotesque. But upon closer inspection I found it fascinating and inspiring. Like Gaudi’s Casa Bottla, which I wrote about recently, around every corner, from every new angle, wherever my eye rested I discovered some new surprising detail to delight me.

The facade at front entrance to the cathedral, which celebrates the birth of Christ, is sumptuously ornate, as you see in the photos above. But as you pass through the building to the back entrance, commemorating Christ’s death, the style becomes more stark, with sharper lines, giving it a modern feel, as you see below.

Some of the most interesting and intricate parts of the exterior were the huge portals, the doors through which you pass from the exterior into the heart of the cathedral..

And here at the portal of Gaudi’s masterpiece I will leave you, saving the equally fascinating interior for my next post.