Stepping inside La Sagrada Familia cathedral is like walking into an enchanted forest. Your gaze goes and up and up, following the trunks of  trees toward light-filled branches.

The forest is made up of several kinds of stone, so each tree trunk has its own subtle shade, some leaning red, others green. They branch out at the top into smaller and smaller columns, like fingers stretching out to hold up an impossibly ornate ceiling. 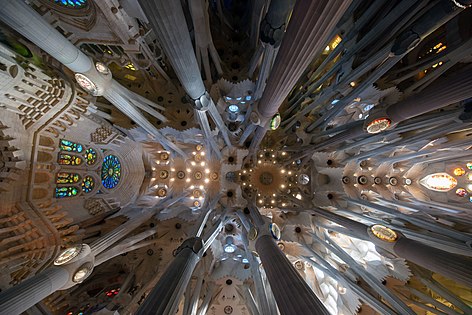 Only it’s not a ceiling at all, but a canopy of leaves and stars woven tightly together, as you would find in any forest grove.

Toward the right of the main entrance is the heart of the cathedral with two massive organs and rows of pews for worship. There floating  beneath an umbrella of lights is the upward-gazing figure of the Christ.

Along the sides of the main chamber are spiraling staircases moving up the towers, to what and where, I do not know.

Colored light floods the cathedral, streaming through the stained glass windows, or projected along the walls and columns, flowing from blue to green, and gold to scarlet,

Glimpses of the crypts below can be seen through artful cut-outs in the stone.

Toward the exit is a large loggia featuring some of the furnishings Gaudi created for the cathedral, and a single simple painting, capturing the tenderness and grief at the fallen Son.

Below are two virtual tours of Gaudi’s Sagrada Familia. The first video is very short and gives you a 360 degree view of the interior main chamber. The second video, which takes around five minutes, shows both the exterior and interior, with some lovely aerial shots outside, while inside the church is full of worshipers during its consecration mass.

All the still photos in this post are my own except for the ceiling shot which came from Wikipedia.

My last blog post features the exterior of La Sagrada Familia and tells more about its creation.