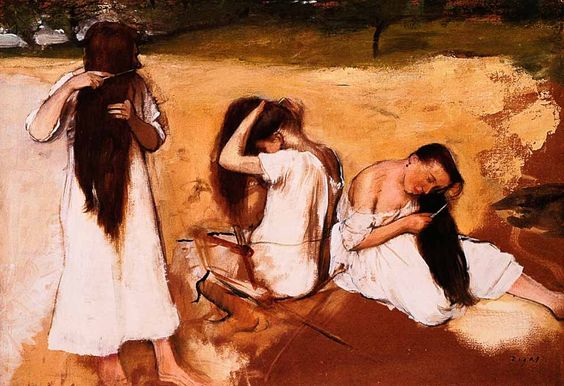 I’m letting my hair grow out. Like a girl again. It’s past my shoulders already, still mostly brown with a few shimmers of light woven through.

I don’t feel old. Few of us do, even while seeing the signs.

When I was young, I always felt young. Too young. Young in a lost, vulnerable, deer-in-the-headlights sort of way.

I could never understand how other children, teens, young women, seemed so confident, sounded so sure of themselves. When everything about me felt tentative, like I was only half-made, not fully formed, still waiting for some sense of wholeness to emerge.

I felt too-young even when I wasn’t.  When I should have known better. When others were counting on me being full-grown. Like my children.

Other young mothers seemed so secure and self-assured in their mothering, in their interactions with the adult world they inhabited. It was always a mystery to me, how they did that, how they could slip so comfortably into something that was clearly beyond me.

With my own children, at one level, we were one. When they were in my arms, on my lap, when we rocked and thrummed together, they were more me, more mine, more us than anything I had ever known. The circle was complete. I was all womb then. Part of some great mothering movement that wound round us. We were one, not two.

But when they stepped away, when we stood face to face, two again, these little people, staring back, startled me. They were like exotic flowers from some distant land who had been plucked and placed, amazingly, in my hands. Under my care. A person who had no idea what she was doing, who was improvising all the way, first this, then that, no gut-level knowing to clue me in.

Not a mother at all. Just this over-grown girl play-acting at best. Even my children, I’m sure, knew. But they played along.

I’ll be the mother and you be the children, we agreed. Sort of. Sometimes. The line blurred. Lots of give in our roles. But we grew into them eventually.

Somewhere along the way I became mom. The sense of wholeness I had been waiting for settled around me and I can’t really point to the moment I knew I was fully grown, at last.

I do not feel young now. But neither do I feel old. I feel somewhere in-between, swaying cozily in some hammock strung between the two. It feels wide open. I don’t feel the years bearing down. I don’t feel something precious slipping away.

I feel right, at last. And wide open.