During my trip to San Francisco last weekend we visited the Asian Art Museum, which was featuring an exhibition of “Divine Bodies,” sacred artwork from Asia. The theme was transformation and transcendence, and the various aspects of divinity as embodied by the Beautiful, the Sensuous, the Fierce, and the Gentle.

A wooden statue of Avlokiteshvara, the compassionate bodhisattva who “gazes down” at the people with eyes full of sympathetic understanding, embodies The Gentle aspect of the Divine.

Below, another “Gentle,” this time of the Buddha, with outstretched hand and lowered gaze. The faces, the gazes, of these two are so similar they could be the same embodiment, although from different times and cultures.

Some of my favorites were the female deities.

Here Parvati, wife of Shiva, represents the female energy of the universe. She embodies The Beautiful, The Sensuous, and The Gentle, with the partial figure of her babe on her knee.

The two below embody The Sensuous, the first representing the link between the female form and fertility, with the woman holding a flowering tree branch. The second is the Buddhist deity Guhyasamaja, meaning “hidden union” of apparent opposites: male and female, mind and body, wisdom and compassion. 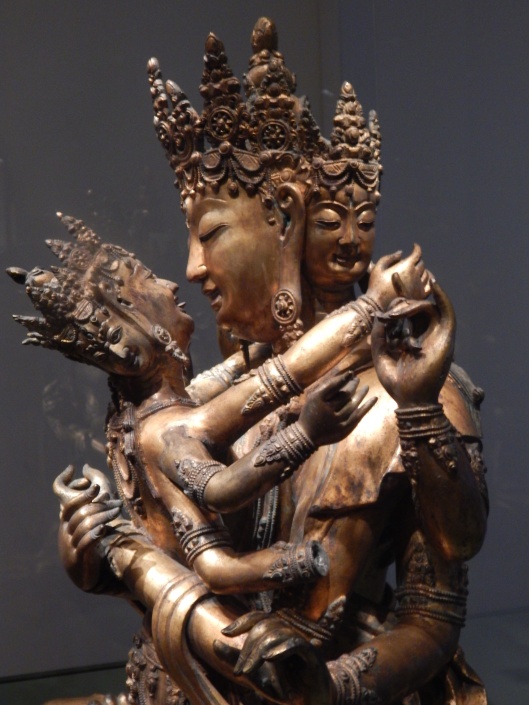 The phallic emblem below is a powerful representation of Shiva as the cosmic creator.

The following two represent The Fierce aspect of the Divine, powerful enough to transmute the negative force of attachment into wisdom, although these were found on other floors of the museum. 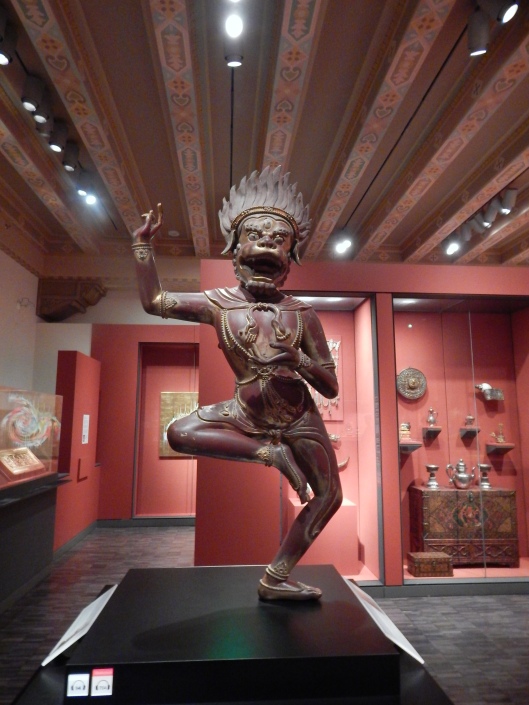 The Divine Body exhibition also included some intriguing modern art installations. My favorite was Impermanence: The Time of Man by David Hodge, a multichannel video installation with various people off the street speaking about the transience of their own lives, in all its frightening and illuminating aspects.

Another by Dayanita Singh featured the transformations of Mona Ahmed, who says that God gave her a man’s body but a woman’s spirit, and that is why they call her Hijra. In India this is considered a third gender and is closely associated with the divine. Her faces follow.

I can see why the artist found her face so fascinating and timeless.

Compare it to the ancient one below, seemingly the same embodiment, transcending time as well as gender.

Scattered throughout the exhibition were quotations mounted on the walls. Two follow.

“Mind has no body distinct from his soul, for that called body is a portion of the soul discerned by the five senses.” – William Blake, poet and artist.

“And while I stood there I saw more than I can tell, and I understood more than I saw; for I was seeing in a sacred manner the shapes of things in the spirit, and the shape of all shapes as they must live together like one being.” – Black elk, Oglala Lakota (Sioux) spiritual leader

I found so much more at this museum that fascinated and inspired me, but I’ll save the rest for a later post.

2 thoughts on ““Divine Bodies” at the Asian Art Museum”