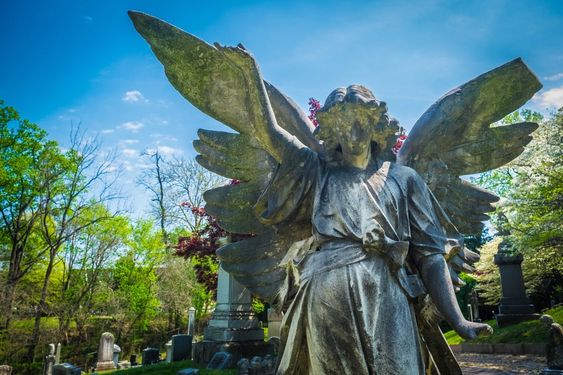 I have two books on my nightstand, Shogun by James Clavell and Lincoln in the Bardo by George Saunders. Both are historical novels, the first an epic adventure story set in feudal Japan in the 1600’s, the second a literary novel centering around the death of President Lincoln’s son, Willie. Both are highly acclaimed.

I began reading them around the same time. The first is 1210 pages, the second 342. Guess which I finished first? Yes, Shogun.

This surprises and disappoints me in some ways. But perhaps it shouldn’t. I had resisted buying, let along reading Bardo, for a long time, despite the fact I’m a huge Saunders’ fan. I fell in love with his short stories in The Tenth of December, especially the title piece and “Victory Lap,” which I wrote about in The Light-Craving Stories of George Saunders.

The reason I resisted reading his first novel, even though  I had read so many ecstatic reviews of the work, was because it just sounded so dark and somber. This despite knowing what a wild sense of humor Saunders has and how “heart-searing and heart-soaring” his light-emitting stories can be, as I had written earlier.

Still. The setting, a graveyard? Inhabited by souls lost in Limbo? A dead boy? A grieving father? I felt the ratchets of my mind closing down one by one: resist, resist, resist.

On the other hand, I came to Shogun, not as a new reader, as I’d already had the pleasure of reading the book 20 years ago or so. I already knew what to expect, but I was curious to see if it would still draw me in and keep my interest so many years later.

What I was really looking for, I believe now, was a book to binge on, like the series I liked to watch on TV–Game of Thrones, The Last Kingdom, Downton Abbey–with characters I cared about, and plot-lines that drew me deeper and deeper into the story. A ship-wrecked sailor cast upon shores of Feudal Japan had the potential to do that. A dead boy in Limbo, not so much.

So does it all just boil down to what kind of mood I’m in? Perhaps. But even more, it comes down to that ever-enduring quint-essential question that all writers, and all publishers, I dare say, grapple with: what keeps the reader turning pages and wanting more?

In Shogun I immediately became caught up in the plight of the sailor and the culture crash when West met East for the first time. I was caught up in the game-of-thrones-type warfare and strategic plotting that was taking place between the Lord Toranaga and his rival feudal lords. I was caught up in the tender and precarious relationship developing between Anjin-san, the ship-wrecked sailor, and his beautiful and wise translator, Marika. It wasn’t that I wanted to find out what was going to happen next. I knew that already. It was just because it was all so fascinating, and deep enough and rich enough that I felt well fed, and yet still craved for more. I’ve already started on the next book in Clavell’s Asian series, each book taking place a generation of so after the other.

But while I found the historical excerpts about President Lincoln and the loss of his son quite interesting, and I was amused and delighted by the array of misfit lost souls inhabiting the graveyard, and deeply touched by the young boy finding himself stranded between worlds while his hapless grief-stricken father holds his now lifeless body in his arms, I was not compelled to find out “what happens next.” The writing was deep enough and rich enough to make me feel well-fed, but not enough to make me crave more–to keep turning pages.

It’s a different kind of story, of course, and is meant to be. In so many ways comparing Bardo with Shogun is like comparing apples and oranges. The first is meant to “capture the pathos of everyday life,” as  Michiko Kakutani wrote in a New York Times review . Or as Saunders himself wrote in an email interview with The New York Times Book Review, to elucidate “that terrible conundrum: We seem to be born to love, but everything we love comes to an end. What do we do with that?”

Bardo is meant to make us ponder the deep, disturbing questions about life, and to deepen our capacity to have compassion for each other, to show us how, as I wrote before, that in the end, “when all the superficiality and fears and meanness are flayed from us, beneath that, we are light-craving creatures: people who are starving for the want of goodness, the want of grace in our lives.”

In 1975 Webster Schott wrote about Shogun in the New York Times: “I can’t remember when a novel has seized my mind like this one. . . . Clavell has a gift. It may be something that cannot be taught or earned. He breathes narrative. It’s almost impossible not to continue to read Shogun once having opened it. Yet it’s not only something that you read—you live it.”

Creating characters and plot lines that allow us to live and breathe through them, that compel us to ponder the deep, disturbing questions about human existence, and to leave us craving for more. Isn’t that what we all want when we pick up a book?

Isn’t that what we all want when we put pen to paper (or fingers to keyboard) in our aspiration to write a novel?

12 thoughts on “Shogun VS. Lincoln in the Bardo”