Recently I discovered the watercolors of John Singer Sargent and Winslow Homer, two great American artists that I had known primarily for their oil portraits and landscapes. But each in their later years, especially when travelling (Sargent the to Mediterranean, Homer to the Key West and Bahamas) preferred painting in watercolor and created some astonishing works. Each was drawn toward capturing the dazzling whites and blues of the sea, the lights and shadows and reflections thrown up on the hulls of boats and mirrored in the water.

“To live with Sargent’s water-colours is to live with sunshine captured and held,” writes one biographer. Another calls Homer “the poet of the sea.”

Sargent was born some 20 years after Homer and outlived him by about as much. But at the height of their careers their worked overlapped each other. Yet while working in similar mediums (oil and watercolor) and drawn toward similar scenes (boats, the sea, light on water) their styles, while equally masterful, were unique. Each captured some unique aspect of the sailing experience, and each captured the spirit of the thing they were after. But they were after different things.

I lived and sailed on the sea for many years, both in the tropics and the Mediterranean. I spent long days in tranquil coves and landless seas, as well as busy ports and colorful quay-sides.  I know that balmy bliss and dreamy languidness. I know the thrill of that chaotic energy.

Sargent’s watercolors capture the boldness and busyness of the ports, the dazzling brightness as the sun dances across the hulls of ships and scatters into the sea, winks among the rigging and splashes upon the warm decks. His paintings capture the sweeping rhythm of hull lines and mast tilts, of sails fluttering in the breeze above swaying decks. Immersed in that chaotic noise, the eye is too dazzled, too overcome with the busyness and beauty of it all to separate out all the chaotic details. One sees only the mass and movement, the lines and curves, the dazzling light and cool shadows. That is what Sargent captures in the watercolors here. Immersion in the moment. When I enter his scenes I’m immediately transported back in time. I’m there standing on the docks with him . . . . . . or approaching the scene from a dinghy. I’m seeing what he sees, feeling what he feels. I am right there at the center of it all.

Some insight into Sargent’s style and method can be found in a publication about his watercolors:

“Sargent’s approach to watercolor was unconventional. Disregarding contemporary aesthetic standards that called for carefully delineated and composed landscapes filled with transparent washes, his confidently bold, dense strokes, loosely defined forms, and unexpected vantage points startled critics and fellow practitioners alike. One reviewer of an exhibition in London proclaimed him “an eagle in a dove-cote”; another called his work “swagger” watercolors. For Sargent, watercolors were not so much about swagger as about a renewed and liberated approach to painting. His vision became more personal and his works began to interconnect as he considered the way one image—often of friends or favorite places—enhanced another.”

Homer’s watercolor scenes have a different style and feel. There’s no “swagger,” no startling viewpoints.

While Sargent’s watercolors have an abstract, impressionistic feel, Homer’s paintings feed a narrative. They aren’t so close up and chaotic. They have a writerly gaze. A “watching from a distance” feel. Rarely do you find a painting without people visible. Without the sense that you are watching a story unfold. You see the wide sweep of sky and sea. You feel the heavy humidity in those clouds and the heat from that dazzling brightness. You see a crowded deck with people raising sails. You see an unfamiliar distant vista. You see a story unfolding. And while you see only one moment of that story, his paintings invite you to imagine more. In Homer’s painting, the viewer is right there–we feel the heat, the hot sky, the warm water, the hand gripping the deck–but like a reader immersed in another’s story, not like we are there personally ourselves.

Homer’s paintings can be as exciting and full of movement as Sargent’s, as we see below. But Sargent’s are rarely as full of human drama and emotion as Homer’s. 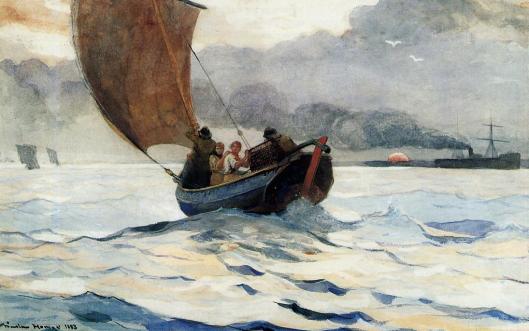 Or as dreamy and wistful. And that’s a criticism made of each. How so many of Sargent’s paintings, while artistically masterful, fail to evoke human emotion or even a sense of what he sees as “beautiful,” as one critic complains. While on the other hand many of Homer’s paintings can be seen as nostalgic, or bordering on the sentimental.

As for me, I see something I love in each. Both speak to me and my experience in powerful ways.

As we were sailing, every leg of our journey was a story unfolding, for my family personally, but also for those people and places we glimpsed along the way. We were voyeurs as well as voyages. We saw scenes unfolding around us that never came to a conclusion. Long lazy days and balmy nights invited us to wonder where they might lead.

At the same time we were immersed in our very own chaotic and exciting sense-experiences, void of narrative, but full of feeling. We wafted between that abstract intensity and the dreamily nostalgic.  As perhaps we all do, immersed in the moment as the long thread of our lives unfolds.

Which artist speaks to you? Do you have a favorite among those shown today, or ones you’ve seen elsewhere?

You can read more about these artists and see more of their works in the links below.

15 thoughts on “Sailing with Sargent and Homer”