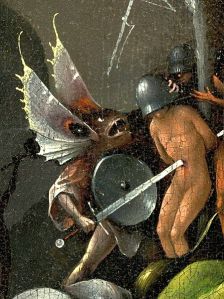 It’s a blessing I think now that I never knew as a child that a woman whose blood still stained the floor had been murdered in my bedroom, or that the man who had murdered her, her husband, had hung himself from the rafters of our garage.

Since starting this series, I’ve done some research on spooks and hauntings and all thing supernatural. I discovered that ghosts are entities that are attached to a particular place and can make appearances, can even be heard laughing or crying or running up and down stairs. But they cannot toss things about the room or physically touch and harm humans. The more physically violent supernatural beings are called poltergeists.

That’s what my mother apparently encountered shortly before we fled from our home. We had already decided to move when my mother entered the small room upstairs that had been used for storage because it was “too cold” for human habitation. She was trying to move boxes out of the room when something unseen attacked her.  It threw her to the floor and pinned her down so that she could not move. All she could do is scream for help.

Unfortunately the only person at home at the time to help her was my three-year-old brother. But he came when she called him. She told him to grab her feet, which fortunately lay near the doorway, and to pull her out. Slowly, inch by inch, he was able to pull enough of her into the hallway so that whatever was holding her down lost its power, and she was able to get up. Never to enter that room again.

We never knew if it was the murdered woman that stalked my bedroom at night, or the ghost of her murderous husband who did so. Nor did we know who or what had knocked my mother to the floor and held her there. 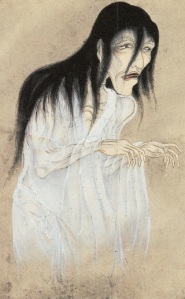 But it wasn’t the last encounter my mother had with a ghostly being.

Many years later she was visited in the middle of the night by a crying woman, someone she knew and loved, but whom, unknown to her, had died that evening. Someone who tried desperately to enter into my mother’s body, because she was not ready to leave this world.

This grieving woman was her mother-in-law.

This is Part II of an ongoing series of true life ghost stories, experienced either by me or by people I trusted.