“This is where it all begins,” Dale whispers to me we take off, rising through layers of clouds thick as fog. “This is where we leave the beaten path forever.”

We are leaving Puerto Rico International airport aboard a tiny six-passenger airplane bound for the British Virgin Islands and nine days aboard a bare-boat chartered cruise. This was to be our first step in testing the waters of living about a cruising yacht before deciding to consummate our long-delayed dream of sailing around the world.

“Start slow–and taper off” is the motto for island living we’re told by the manager of the West Indies Yacht Charters at Maya Cove as he greets us and our good friends Steve and Kathy with rum punches when we arrive.

We whole-heartedly comply as we sail away the next day on our O’Day 37 and anchor off lonely Norman Island, which is said to be the inspiration for Robert Luis Stevenson’s Treasure Island.

Somehow I’m reminded more of something written by Jules Verne as we set off early the next morning in the dingy to explore the caves hidden in nearby cliffs.

There’s an eerie beauty that clings to the island as we slip though long, cool shadows cast by the dark cliffs rising steeply from the water. Above us large sharp-winged albatross circle the pale sky and screech like ancient, flying reptiles once might have done. While in the seas below, I can almost feel the whirlpool that could soon be sucking us down to some prehistoric paradise beneath the ocean. We pull the dingy onto a small, rocky beach where two angry gulls swoop down from the cliffs, diving noisily at us. Soon we are snorkeling toward the caves, finding that the watered world below holds all the primeval beauty and excitement we anticipated.

We tack across the channel toward Virgin Gorda the next morning, where we stop briefly at “The Baths” and climb among the giant-sized boulders strewn along the beach.

Later we press on toward Spanish Town, where we wander down a narrow, squall-puddled lane amid wild orchids and flaming Jacaranda trees to find Fischer’s Cove Restaurant. There we dine on spicy-sweet pumpkin soup and the most succulent lobster that any of us can remember tasting.

The next day we sail into Gorda Sound and spend a quiet evening at Robin’s Bay, cleaning and cooking the tuna that Kathy caught on the way. In the morning we head to Mosquito Island and anchor off the reefs where we go snorkeling.

We circle past beds of plump brain coral and wander through the lavender gardens of lacy fan coral where fat butter-and-black striped fish seem to hover like bees. Swimming past the rocky point, the sea becomes so deep that we seem to be tottering on the brink of some dark, fathomless cavern. We dive down into these cooler waters and are suddenly swallowed by thousands of tiny silvery-quick fish. Always, lying just at the edge of our vision, wait the pug-jawed barracuda, like wary watch-dogs. We surface on the far side of the island and sun ourselves in a quiet, sandy cove before hiking back across the island through an intricate maze of sea-grape, palms and cacti, then swimming out to our boat.

That night we anchor at the Bitter End Marina, an appropriate name it seems. Sleeping under the stars on the deck, looking out between Saba Rock and Virgin Gorda, it seems we’re perched on the very edge of the Caribbean with all the Atlantic and the dark shores of Africa hidden in the night before us, blowing its hot jungle-scented breath across an ocean to touch us where we lay. From a nearby boat, men are singing a low, rowdy drinking song, floating across the water like remnants torn from a colorful, pirate-ridden past. Even the stars seem half-submerged in a night swollen with dreams. It’s our first night of no-rain, and we lie there in our pool of moonlight, talking quietly and sinking slowly into sleep.

The next morning as we head back toward Tortola the rain that avoided us the night before is close on our heels and Steve and I are busy snapping shots of the dark, but lovely on-coming squall. Too soon it’s upon us and I barely have time to put the camera away before we are heeled over, topsides awash. Kathy is furiously reeling in her fishing line, her bikini top blown down about her waist, while she slides helplessly over the side. I just manage to grab hold of her before she’s washed away, when Steve calls for her to run and get the soap so he can take advantage of this tropical shower. Within fifteen minutes the squall has passed and I have my camera out again. This time I make the crew line up and pose, asking them to look as much as possible like drowned rats. Steve, especially, seems well suited for the task. 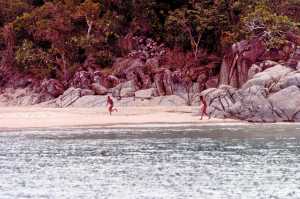 The northern shores of Tortola are exceptionally lush and inviting with several deserted coves becoming our own private play grounds.

Here the water seems spilt from a paint box—deepest indigo flowing into turquoise, and then rinsing out to a pale sapphire on the soft, white sand—while behind rise groves of palms and steep, forested mountains. 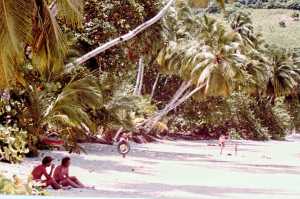 Cane Garden Bay is but a wider, populated version of this.

We lay at anchor in her large generous mouth with run drinks in hand, a kind of easy languor settling over us as our senses become well sated. On shore we measure the progress of an old man on a donkey riding out of the steep hills, disappearing in the foliage, and crossing a stone bridge.

Nearby a boat plays at spinnaker-riding. We watch as the wind catches the brightly colored sail, lifting it high about the mast like a giant kite, while swinging on a line drawn between the clues, a young woman squeals with delight.

Toward evening, colors grow mute and sound emerges—faint tinkles, soft drumming, a syncopated beat. The two sleepy beach bars are finally stirring and soon a battle of the steel drum bands is in full swing. The hypnotic, calypso music is wafted through the balmy night, across starlit water, luring wayward sailors ashore. In time, we too succumb. 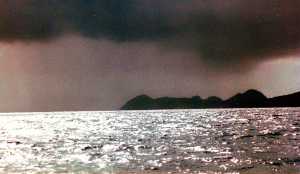 We make our last anchorage at Little Harbor on Peter Island. Kathy and Steve catch a red snapper and king fish on the reefs that we barbecue for supper. The moon rises plump and round over the mountain, dancing briefly with roguish clouds before another squall blows in. We sit below the Bimini in a womb of water, none of us wanting to go below and put the night to sleep. When we do it is one by one, each along, like candles that burn out slowly and separately in the night. 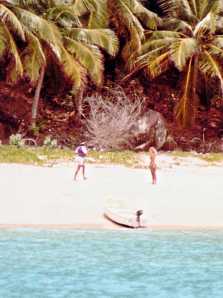 It is a rare occurrence, these last nine days in the British Virgin Islands—a trip that surpasses even our inflated fantasies of it. The best part is the naturalness of it all: the rising to a shared breakfast beneath the early morning sky, the daily scrubbing of decks, dishes and laundry, then festooning the life-lines with drying clothes; the fascination of snorkeling and sensuousness of sailing, when the sun and rhythmic seas soothe the soul even while vigorous winds and drifting vistas stimulate the mind.

There’s the feeling that this is life at its most eloquent and elemental form—a life worth pursuing. We leave the islands with one conviction firmly in mind: It’s time for our dream of sailing around the world to begin ripening into reality.

But before we do, we take one more bareboat charter into the tropics—this time to the Bay Islands of Honduras with Dale’s father.